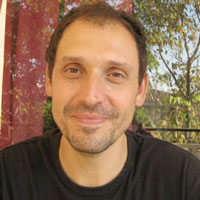 As a psychologist, Jordi Borràs has been investigating for years the possibilities of dreams as a therapeutic tool and as a way of developing awareness. He received the teachings of Lama Tenzin Wangyal Rínpoche of the Tibetan yoga of dreams, and with these, his authorization to transmit its practice as a therapeutic tool. He represents the International Association for the Study of Dreams in Spain and Portugal. Through diverse media he has shared his interest in the dissemination of a more balanced lifestyle. Spirit-driven in his search he has had the opportunity to advise and participate in 13 episodes of the series Somiers (TV3) and frequently collaborates, among others, in a radio program called L’ Office de Viure of Catalunya Ràdio. He also worked as a consultant and actor in the film Volaré (Televisió de Catalunya).